A learning organisation fit for the future

GUTMANN ALUMINIUM DRAHT (GAD) is made up of a variety of functions, from sales, R&D and purchasing to manufacture, despatch and logistics. Then there are functions such as maintenance, EDP, management systems, HR etc. Within these functions, each member of staff owns a defined set of tasks for which they have the authority to make their own decisions. From machine operators to members of management, tasks are assigned in accordance with the skills of the employee concerned. At the same time, employees allocate themselves to specific task groups and work on these tasks in teams. 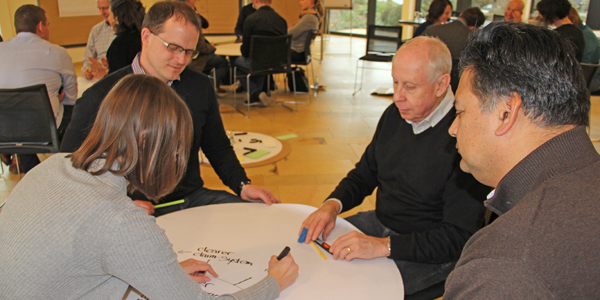 In sharing everyday problems, it can help to take a step back.

The principle of consent

If a decision that needs to be made in a specific area also has implications for other areas and roles, and if it therefore lies outside of one's own decision-making authority, a decision group is formed that includes managers who have overall responsibility in matters of governance. The meetings are held in accordance with the principle of consent, which was first developed in sociology theory and later evolved into the management theory known as holacracy. Under this theory, a project can be implemented only if no irrefutable objections are raised or could be raised. Any objection must be based on a clear and present disadvantage that would be caused to anyone tasked with carrying out the project.

In classical decision-making involving many parties, the opportunities and risks that a decision might entail in the future are discussed, and sometimes it can happen that a decision is not taken until it has long since been superseded by events. The idea of basing objections solely on the present is to ensure action is taken quickly and efficiently.

Should it transpire in the future that, despite there being no objections or sufficiently valid objections, the decision taken turns out to be wrong, there is no apportioning of blame, but rather an objective analysis of what went wrong. What were the structures and processes in place at the time that ensured that, when the decision came to be taken, the relevant objection was not raised? In this way, mistakes can be used for continual analysis and improvement. Errors become opportunities for learning.

Every action taken is decisive

The principle of the learning organisation is based on a commitment. The commitment is that every member of staff is aware that, at every level, individual actions, whether directly or indirectly, can contribute to the company's success. From serving stakeholder interests, to engaging constructively with colleagues, to efficient organisational processes, each and every employee is responsible for contributing to our success. In a globalised and increasingly dynamic world, this joined-up yet independent thinking, and the flexibility associated with it, are decisive for future success. That is why GAD aims to be a flexible learning organisation. It derives its strength from the continuous improvement of its structures and processes, and above all from its most important resource: the people who work here.