"Can I do it again next year?"

With its apprentice workshop, the Altmühlfranken Future Focus initiative is helping to boost the region's economic activity. Interview with Greta Weisenseel.

"Can I do it again next year?"

For sponsors, companies and the apprentices themselves, the second apprentice workshop was a resounding success

First held in 2017, the Altmühlfranken Future Focus initiative's apprentice workshop has taken place for the second time. The pilot involved six training events, while this second iteration (which ran from autumn 2017 to summer 2018) offered ten courses for regional apprentices, with each course offered once a month. The number of companies and apprentices rose from 12 and 58 respectively to 18 and 72 respectively. The apprentices taking part are released from work by their employer and gain a certificate on completion.

In December 2017, GUTMANN ALUMINIUM DRAHT (GAD) arranged two days on the theme of 'staff who think for themselves'. In taking part, GAD demonstrated its commitment to the regional economy, to the future of young people and to the importance for business of training. Here Greta Weisenseel, who is responsible for training and family at the initiative and who runs the apprentice workshop, reflects on what has been achieved so far and which events had the greatest impact. Greta's personal favourite moment came when a young girl taking part in her first workshop asked "Can I come again next year"?

Strengthening the regional economy through teamwork

GAD: What do companies have to do in order to take part in the apprentice workshop? Do they have to pay?

Greta: It's free for everyone, for companies as well as apprentices. For companies that are too small to hold events on their own premises, we host events on the plastics campus. GAD has its large meeting room, so at their request this two-day seminar was held there.

GAD: Who comes up with the ideas for the seminars: you or the companies?

Greta: We develop them jointly as part of the opening event. All the ideas are gathered together, put on a flipchart and then discussed. Those that prove the most popular make it onto a shortlist. We have a theme for each month and this month we have ten themes.

GAD: If a company makes a suggestion, does it then have to implement it?

Greta: No, as part of the initiative we make it quite clear to companies that, if there is a theme that they would like to suggest for their apprentices, the company doesn't have to do it itself. Perhaps it would be better suited for another company to implement. In the first instance we just want to gather as many good ideas as possible, without creating the pressure that, if you come up with an idea, you have to see it through.

GAD: Does the joint planning of the seminars influence the interaction of the companies in the region? Is there not a danger than one company will steal apprentices from another? I'm thinking here primarily of the much discussed skills shortage, which may lead to apprentices being poached by another company in the same sector. 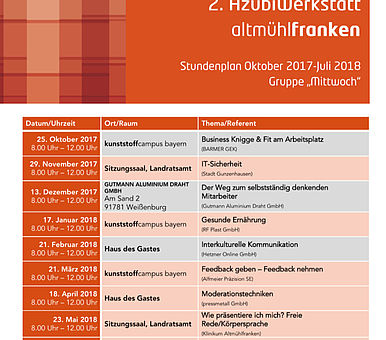 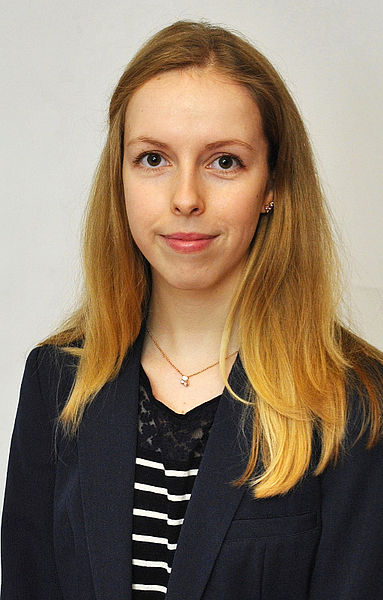 Greta: Whether or not the initiative has this sort of effect, I can't say. Perhaps that sort of thing does go on occasionally. But companies are already part of a network just by agreeing to take part in the apprentice workshop. Technical college timetables have to be factored in and there has to be agreement among the companies as to how many apprentices they send. For small companies that could never organise something like this themselves this balance is important. If a company is very large, say with around forty apprentices, that would take places away from companies with only one apprentice. A company as large as that could and should organise this kind of training in-house. On the other hand, the initiative can act as an inspiration and template for larger companies. So we've found a solution that keeps everyone happy: large companies from the region send just a small number of apprentices, and from their experience the company can develop its own learning. Overall I think that, by cooperating in this way, we can support the regional economy as a whole.

I'm very impressed with how these young people get stuck in

GAD: Are there any set rules for the seminars?

Greta: There is basically only one rule: no teaching from the front of the classroom. Learning has to be interactive with more of a workshop character.

Greta: There is no sector-specific content. It's primarily about soft skills and cross-sector knowledge. You can see that from the diversity of topics (see image).

GAD: What kind of experience do the facilitators have?

Greta: One of the facilitators, who had previously only taught adults and was a little sceptical about our format, told us how impressed he was with how well these young people contributed.

Greta: Yes, because what we see over the months is groups coming together. But for me what is important is that preconceptions get challenged. One young man said to me that nurses weren't as 'thick' as he had thought. I take that as a positive.

GAD: How do the apprentices respond to the content?

Greta: What I find especially pleasing is that so far not one of the apprentices has found any of the seminars 'stupid'.

GAD: How self-aware are the apprentices in these seminars?

Greta: Most of them are aged between 15 and 19, although a few are slightly older, and that has been a good thing. As the older ones are not shy about speaking in a group, that encourages the younger ones to believe that they too can speak out without there being any negative consequences.

GAD: The fact that apprentices want to take part in a second round of training is a good indicator of the quality of the initiative. But how do you deal with this desire to take part again? Presumably you want to ensure that as many apprentices as possible from the region can take part.

Greta: That is something we always bear in mind. But if the number of seminars offered, the number of different topics and the number of applications means that some people can take part twice, then why not? We are pleased that our initiative is being so enthusiastically received. In this year's event, we have seven apprentices who were also here for the pilot.