Being part of a group – and being heard

Being part of a group – and being heard

The second stage of the Altmühlfranken Future Initiative's apprentice workshop took place from October 2017 to July 2018. From last autumn, companies based in the region organised apprentice training, with a new topic being addressed each month. GAD offered to host the seminar entitled Creating Independent and Free-Thinking Employees. 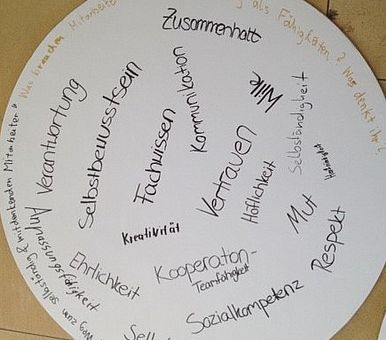 "I'll spare you the cymbals"

The seminar was led and moderated by Michael Wolf, process mediator at GAD, and Werner Götz, who is responsible for apprentices at GAD. The discussion group format, which is typical of GAD's decision-making processes, bookended the individual seminar stages, with a round of introductions at the start and a reflection session at the end. A few ground rules were observed: listen attentively to what the speaker is saying; no interrupting ("When is it my turn?"); and do no begin speaking until the other person has finished.

To ensure these rules were adhered to, a stone was placed in the middle of the circle, representing the concept of self-discipline. Whoever was speaking held the stone in their hand and put it back when they finished. The next person to speak would then take the stone from the centre. "I'll spare everyone the cymbals," joked Michael Wolf, who wanted to make this way of holding discussions seem less alien for the newbies. This was a reference to GAD's practice of sounding a pair of cymbals to bring over-lengthy contributions to an end. This disciplinary role was assigned to the moderator of each group. Discussions also took place without a moderator, which proved to be a challenge for the apprentices. Comments ranged from "really strange" to "totally cool".

Between the opening and closing discussion sessions, the apprentices were invited to reflect on the issues raised. In five groups, they discussed a series of five questions for ten minutes per question. The questions were:

To question and comments such as "How can this type of corporate culture work?" and "I just can't imagine it working", Wolf and Götz responded that, before the cultural shift was put in place in the summer of 2015, GAD had around five years of preparation time involving intensive team workshops, values work etc. And a learning organisation is never "finished" in the sense of having no more cultural development work to do. That would be a contradiction in terms.

To illustrate what autonomous working looks like in practice, the apprentices listened to excerpts from the ARTE film Mein wunderbarer Arbeitsplatz, which is currently available only as a sound recording. Some of the apprentices requested a tour through the manufacturing division ("We'd love to talk to these people") but this proved impracticable. As the seminar leaders explained, allowing 25 young people to walk through the manufacturing area, with all the safety precautions that would involve, would be impossible even for a company that prides itself on autonomous working. This is where transparency comes up against operational necessity. In order to get at least some hands-on experience, the apprentices were allowed to practise moulding aluminium wire in the seminar room.

How can we create a culture in which people enjoy working?

What did the young people take away from these sessions? To get to grips in one morning with a theme as complex as the learning organisation (as explained in the document "Ein Unternehmen erfindet sich neu" ["A Company Reinvents Itself"]) is simply not possible. What was achieved, however, was a consideration of what a culture of cooperative working, in which people enjoy working, might look like: a culture of self-awareness and responsibility for one's actions, respect for colleagues and the courage to stand up for your ideas. "Of course," says Werner Götz, "for the apprentices who were here, the most important consideration is to complete their training." But the facilitator is confident that the apprentices will continue to discuss the issues among themselves. "If any of these apprentices pass on what they have learned once they are full-time employees, then that is a significant achievement in itself."